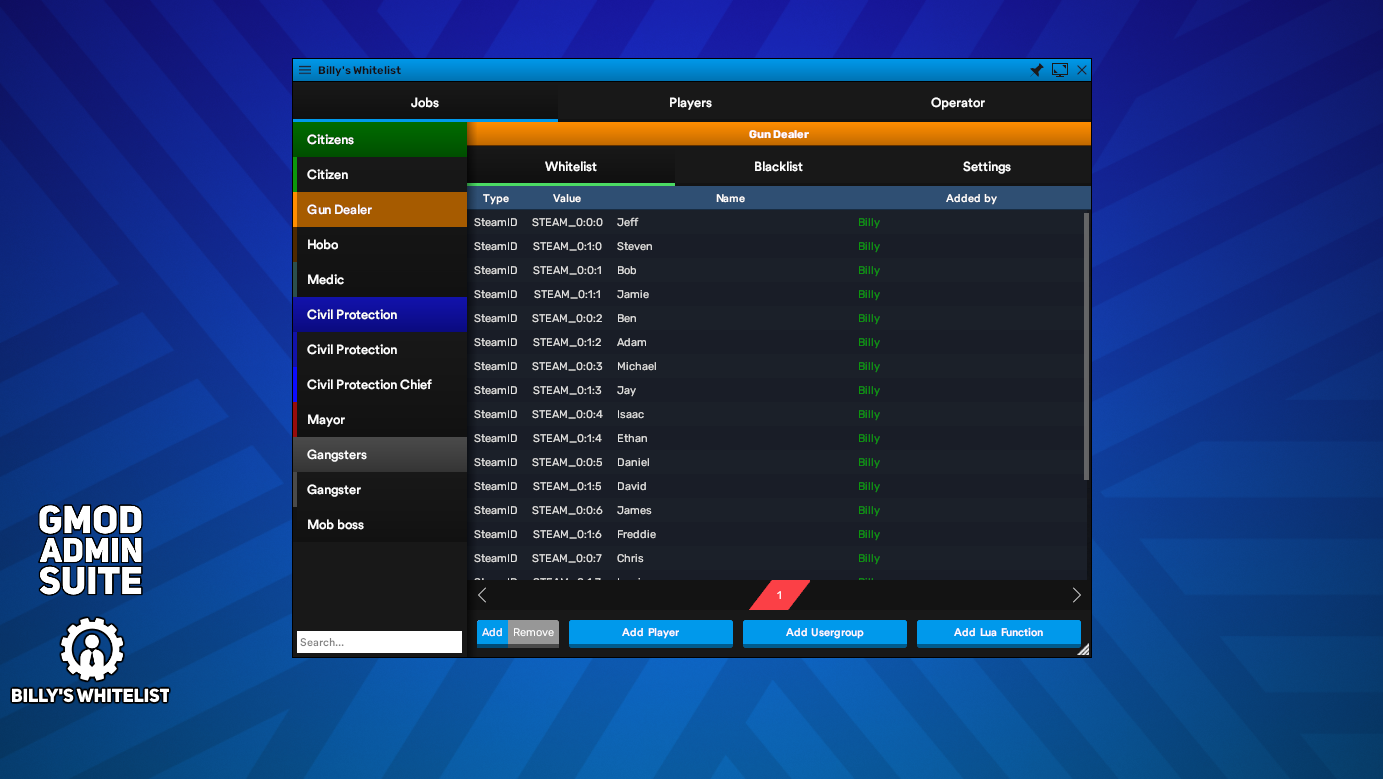 bWhitelist gives your players & staff the ability to control who can access what jobs ("whitelisting") and who can't ("blacklisting") on the fly. This is designed as a replacement for DarkRP customChecks, which require server restarts and don't support donation systems!

A job whitelisting system is a tool used by you, your admins and your players to easily control who can access your server's jobs for DarkRP forks such as MilitaryRP and StarWarsRP. It's not just for those forks though, so use it wherever you want! The system is a simple customCheck replacer. Normally, you'd have to add SteamIDs to the customCheck fields on your DarkRP jobs in order to allow specific players to access those jobs. Now, you won't have to do that. bWhitelist will automatically "add" people to these customChecks for you without server restarts. This saves you, your players' and your admins' time and makes the whole process a lot smoother.

An example of bWhitelist in action is on StarWarsRP servers.. a trainer would be able to train recruits to become stormtroopers. Once those people pass your tests the trainer can simply open up the menu and add them to the job whitelist for stormtroopers. Infact, they don't even have to open the menu, they can just use the context menu to right click the player and add them to the whitelist through there.

I'm using ULX to whitelist my players, why should I switch?

ULX is a very impractical way of whitelisting your players.

In conclusion: are you using ULX? Stop for the sake of your players and admins!

Other scripts have laggy methods of storing whitelist information and have caused server owners (and even players) countless hours of frustration.

bWhitelist also has the widest script support and the most features of any system.

bWhitelist is the cure to all of your problems. Switching from another whitelist system? No worries - all your whitelist data can be transferred from the previous systems in the click of a button.

bWhitelist is your only option! You'll never have to switch to another whitelist system.

bWhitelist has many features for you, your admins, players and servers:

MySQL support - sync all your whitelists across all of your servers and save performance by doing all the processing on your MySQL server instead!

Context menu support - your players will simply be able to right click other players using the context menu to easily interact with their whitelists.

No customChecks - you won't have to edit your job file at all. bWhitelist uses native DarkRP hooks to control the flow of jobs.

Supports most versions of DarkRP and DarkRP forks & renames such as StarWarsRP and MilitaryRP.

No bottleneck on the server

Will never crash your server

Compatible with all admin mods

Wide range of easy to use bulk actions

And more with your ideas…